This weekend, I played uiuctf with DiceGang. Although all of the pwn was splendid, one did really stick out to me, and that was mujs. mujs relied on MuJS Javascript engine, which I have never worked with before. Although I am very unfamiliar with javascript pwn, I must give props to Sam Sharps, the author of this challenge, for the the installations scripts and templates as well as the informative README.md which made this challenge a whole lot easier to setup and begin bug hunting.

As a side note, thank you jiwuko for making the drawings in this writeup.

Usually, when doing a JS pwn challenge, you’ve got to somehow get a shell. But uiuctf wasn’t going to make it that easy! We had to implement 3 different primitives to get the flag. In addition, all 3 primitives needed to work across platforms.

Dang, this is looking like kind of a tall order. But that’s alright! We can tackle creating each primitive individually, each primitive building on the last. But, of course, if we want to have any hope of implementing these primitives, we are going to need to find the bug first.

Finding the bug was really really simple! The README.md told you that the bug was in a function called Ap_join in jsarray.c. Ap_join is the function handler for Array.prototype.join. For reference, .join has the following result:

The first thing I did was git diff HEAD to see what changes the authors made in this file. This way, the vulns would be a lot easier to find!

But… there was only one change…?

So, it seems that the variables k, n, and len have all been squished from 32 bits to 16 bits. It’s also unsigned, so this means these values can’t become negative no matter how large they get. This raises the question, “How does the change in the maximum capacity of these 3 variables lead to undefined behavior”? Well, in order to answer that question, let’s consider what we know about the maximum capacity of integers that might help us exploit the small capacity of these 16 bit integers.

When an integer tries to hold a value that is too big for it’s intended size, it’ll only store the amount of bits it was designed to hold from that value. For example, when reading a 64 bit integer, a 32 bit integer will only store the first 32 bits.

This is known as an integer overflow. Remember this! It’ll serve us well. As a tiny demo, I want you to predict what will happen if we added one to a 16 bit integer holding the maximum value that can be represented by 16 bits.

Go ahead! Try it. It’ll help you build an intuition for integer overflows.

Now that you’ve tried, you’ll realize a will have dropped to 0. Why though? Well, let’s reason why by looking at the binary.

Going back to our .join code, if we can find a place where a sudden drop in value due to an integer overflow would cause undefined behaviour, we could exploit that! So, let’s track variable usage of k, n, and len to see if we can cause any of these variables to overflow. This for loop is the most important code, which creates the string to be returned from .join. Please look over it carefully! I’ve added comments to make it more easy to understand.

Woah, that’s a lot of code! Don’t worry, we can break it down, piece by piece. First, let’s try to find out what each variable is used for. Clearly, k is used as the iterator counter, so overflowing it wouldn’t do much besides reset the loop. How about len? Well, len represents the length of the array we are calling. len is used as the upper bound of the loop, so making the array longer than the maximum value of a 16 bit unsigned integer would just cause the upper bound to shrink, which isn’t very helpful.

n, on the other hand, could be very useful. n represents the current length of the result of .join. I want you to really focus on the following code. For context, r is equal to the current element of the array we are joining.

These couple lines will be the holy grail of our exploit. But before I tell you why, I want you to try to see why an overflow in n will allow us to cause undefined behavior! As a clue, note that r can be made as long as we want, even longer than the maximum size of a 16 bit integer. For now, let’s just consider the code when k, the iterator counter, is 0. We will discuss the else case in a bit.

Did you see it? That’s right! If and only if n overflows, there will be a discrepancy between the size of the data and the size of the allocation for the data. Didn’t get it? That’s alright, I didn’t spot it right away either. Either way, let’s consider what might happen if the length of r happens to cause n to overflow. 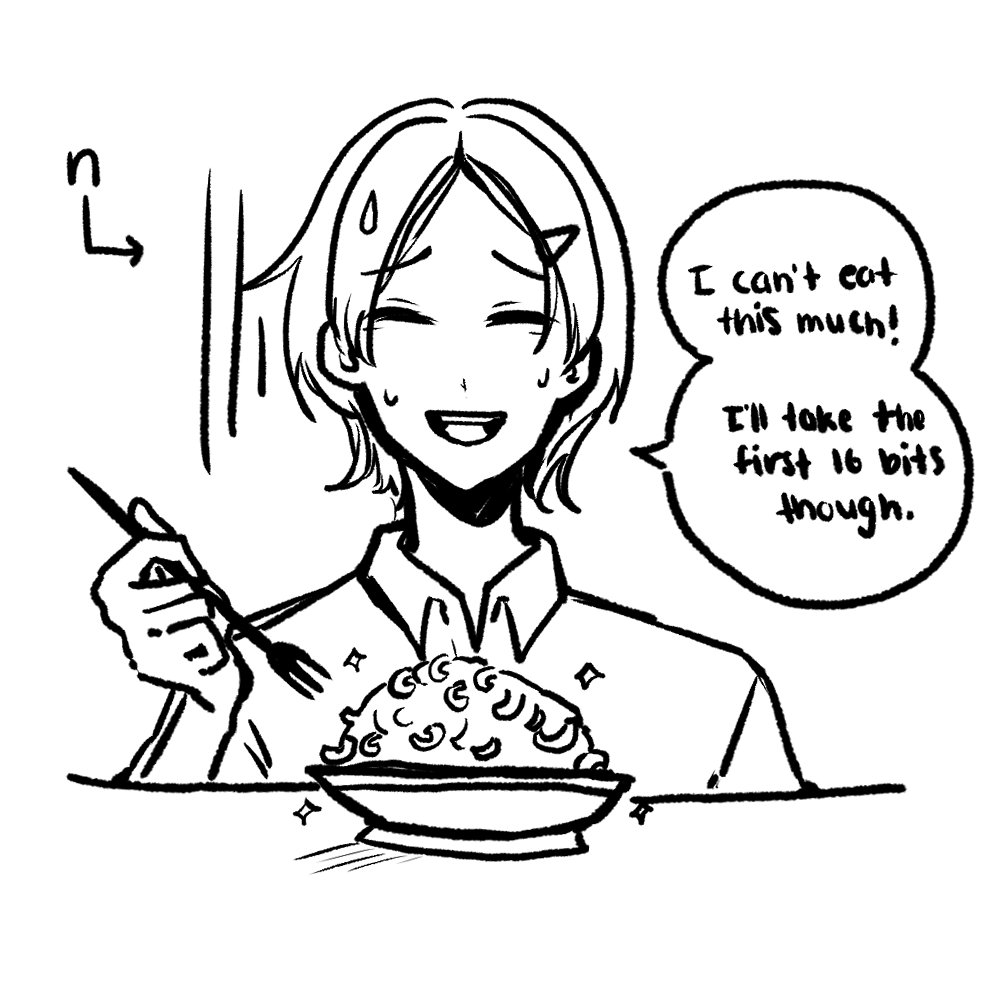 n taking only the first 16 bits.

Of course, this is an unrefined version of the bug. In an optimal case, we’d like this bug to allow us to choose two things:

This is because the only time we will ever get a heap overflow is if the length of r overflows n. But in order to get this integer overflow, r needs to be the maximum size of a 16 bit integer so it overflows n, meaning if we want an overflow, we can’t really control the length of r. However, if we use two elements, we can do this.

Found a solution? Instead of explaining this in words, I’ll let the code do the talking first.

Although this looks a little weird, i’ll make more sense if I show you the C that’s running the the background.

For the first element:

No bug exploitation for the first element, but that changes for the second element.

Interesting, right? The program never expects the reallocation to be smaller than the previous allocation, so strcat will append to the end of the chunk. The trick to getting a user sized overflow is to make the size of n just big enough in the first element so that the second element actually causes the integer overflow. Now that we have our heap overflow, how can we abuse it to get any primitives?

Me and my team tried several ideas to turn this heap overflow into primitives. We kept running into the issue that our exploit needed to be cross platform and preferably leakless. We tried assembling fake objects and attacking the custom allocator, but all of those required leaks. Then, we decided to look at what an object in MuJS is structured like in memory so we could possibly change important values with our heap overflow. That lead to us finding a javascript exploitation tactic know as “type confusion”.

Now, before we actually get into type confusion, let’s look at the structure for an object in memory. It’ll let us know what we can change!

Our heap overflow can’t contain null bytes, since Javascript doesn’t allow null bytes in strings. This effectively prevents us from changing anything that’s not the first member of this structure. But that’s alright! The first member is something called type and is a variant of an enum.. maybe we can change that?

Taking a look at the js_Class enum, it becomes clear what exactly this type variable does. Take a look for yourself.

Everything in MuJS that isn’t a primitive data type is a js_Object! And this type variable tells the program exactly what type of object it is. This gave me many ideas.

Taking a couple of notes here, there seems to be an union called u in js_Object. I encourage you to check out the source code yourself to see the full defintion of this union, but if you can’t, that’s fine. This u union seems to contain the type specific data for the object. For example, a string, this union will contain a pointer to the string and the length of the string, but if this object were a function, it would contain a pointer to the function and the name of the function. Keep in mind all members of a union will occupy the same space in memory, so if we managed to change the type of the object, data in the union would be treated differently than intended.

For my exploit, I decided to change a Regexp object into a DataView object. Before I discuss why I chose these two objects specifcally, let me show you what a Regexp and DataView object is.

A Regexp object is just a regular expression in Javascript. It need not any introductions, but you should know it’s memory structure since it’ll be useful when we change it to a DataView.

The relevant property here is the source. source is the regular expression string, which we can control. The fact we can control it is very useful, so keep that in mind.

Now let’s look at DataView. DataView was added by the author and essentially is a C array but for Javascript.

The length denotes the length of the C-like array and data is a pointer to the array. If a Regexp suddenly became a DataView, how would it’s data in the union, like source and prog, be interpreted as a DataView? Think about it.

Well, since this is a union, prog would go where length is, and source would go where data is. prog is just some pointer, but if it were interpreted as the length of an array, then the length of the array would be absolutely massive! And remember that source is a pointer to a user controlled string, so we can essentially treat this string like a super long array if the Regexp became a DataView!

As a proof of concept, let’s try writing out of bounds.

DataView.prototype.setUint8 has a check to ensure the object calling it is a DataView, but if we change the type using our overflow, we can confuse setUint8! 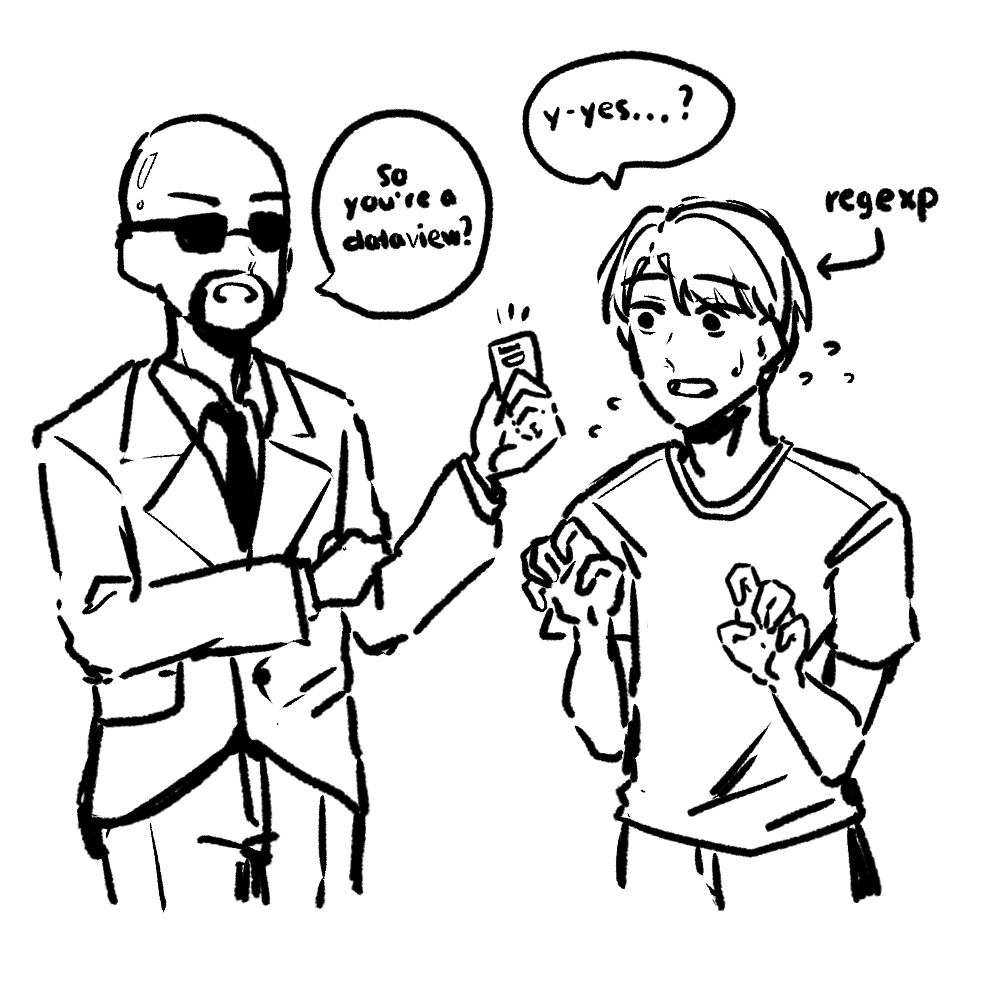 By the way, the heap grows from higher addresses to lower addresses like the stack does with the included memory allocator, so victim would be at a lower address than the .join result, meaning we can overflow victim’s type.

If we allocate a DataView right after the RegExp source string, we can overwrite properties of the DataView. The main property we want to overwrite is data, since that’ll contain a pointer to the C-like array. We can use the RegExp to move the C-like array pointer in the adjacent DataView and make it point to wherever we want! From there, we can use the DataView with the changed pointer to do read and writes. 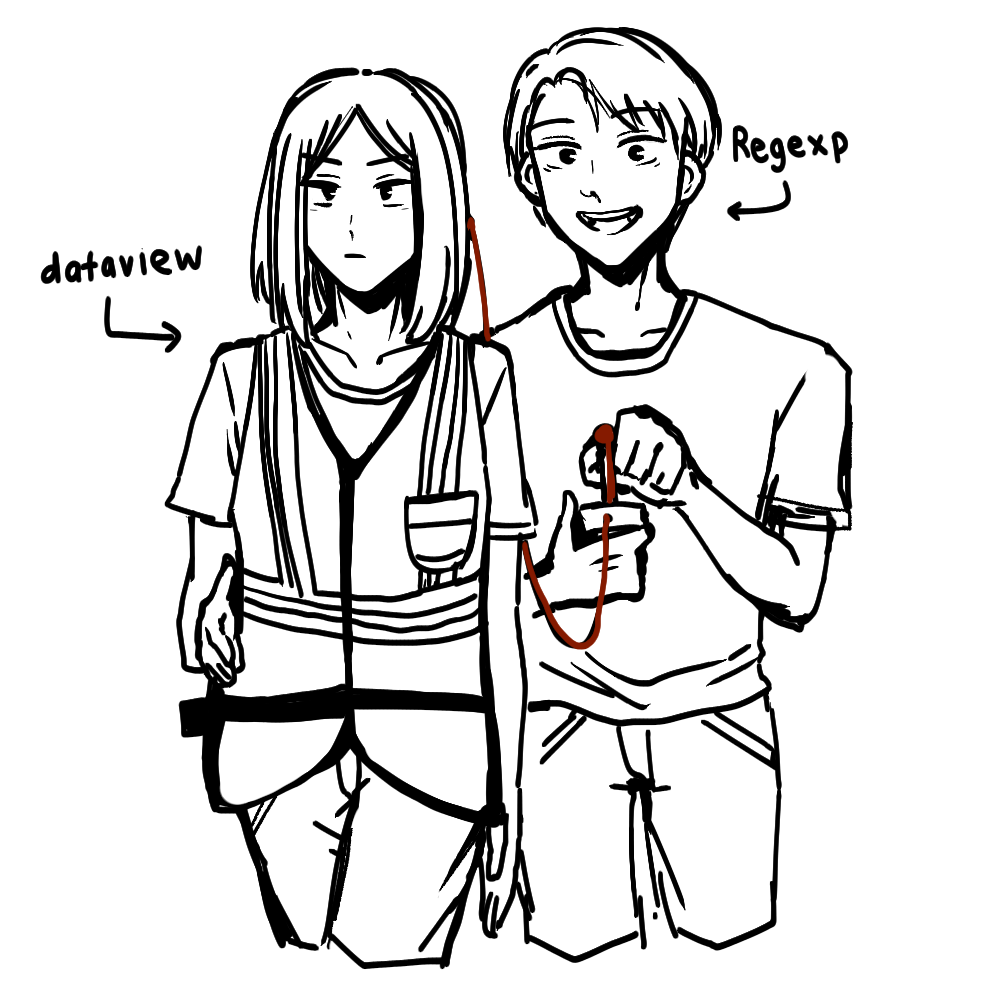 RegExp controlling where DataView goes, while DataView does the work.

Hopefully you’ve got that hammered into your head now, but if not, here’s an example!

Now that we have arbitrary read and write, we need to get arbitrary code execution.

Now that we have arbitrary read and write, the heap is our oyster. Getting code execution is fairly easy from here! We just need to do a little more type confusion. For my implementation of ACE, I changed the type of a regular object to that of a CFunction, a type for built in C functions for JS. Ok, ok, you technically don’t need arbitrary read and write to pull this off. In fact, the out of bounds of write is plenty to change the type of the regular object and write the address of the function to be executed. Here’s my code to do this.

Now we have all three requirements!

The path from an integer overflow to arbitrary code execution was certainly not a straightforward one. Let’s go over how we got here.